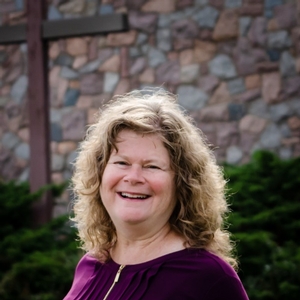 Pastor Stephanie Kidwell  received a B.A. from Purdue University, a J.D. from Indiana University School of Law and earned her M.Div. from Iliff School of Theology. She has been involved in the United Methodist Church in many capacities including, a member of the General Board of Pensions, chairperson of the Conference Board of Trustees, member of the board at Frasier Meadows, and currently serves on the Executive Committee of the Conference Board of Ordained Ministry.

Stephanie is married to her high school sweetheart, Kevin Kidwell. Kevin is the Director of Sales for the United States, Canada, and Mexico for Westrup, Inc. an agricultural machine company based in Denmark. They grew up in Indiana. Kevin and Stephanie between them have 4 grown children: Gabriel, who makes his home in Santa Ana, CA; Lydia and her husband Mat in Seattle, WA; Heather in Carmel, IN; and Matt, his wife Kara, and 3 grandsons also in Indiana. Stephanie’s daughter, Claire died of childhood cancer in 1998.

When not at church, Stephanie and Kevin enjoy spending time at their cabin near Estes Park, taking drives in the TR-6, reading, and traveling.